To share your memory on the wall of Virginia Terrell, sign in using one of the following options:

Provide comfort for the family of Virginia Terrell with a meaningful gesture of sympathy.

Virginia saw her role in life as daughter, wife, mother, and grandmother. All she wanted to do was to care for the needs of others. She and Wendell were Civil Defense volunteers after he returned from WWII service in the Pacific. She had a unique sense of humor and you never knew what might come out of her mouth. It was her job to make the coffee for the volunteers and was asked how she made such good coffee. She said she used dirty socks, and on one occasion lifted the lid off the pot to reveal a pair of socks! When her children were grown, Virginia continued her volunteer service. She spent many hours in the laundry of Michigan Christian Home, now known as Beacon Hill at Eastgate. She also drove the “old people” to their various appointments. She was a dedicated and determined member of TOPS (Take Off Pounds Sensibly) for many years. Wendell and Virginia were long time members of the Victory Class at Wealthy Street Baptist Church (Wealthy Park, Plainfield Baptist). They moved into Plymouth Apartments at Beacon Hill in 1999. Wendell passed away in 2002 and Virginia moved into the Mary and Martha Assisted Living in 2010. She kept right on volunteering in the laundry until administration deemed it no longer safe for her to do so. Even then her desire to be useful found her looking for ways to assist others. She took it upon herself to direct to loading of the elevator at busy times so that residents could exit efficiently! Until age and health issues wore her down, we often referred to Virginia as the Energizer Bunny… she just kept going and going!

Virginia was preceded in death by her parents and her husband. She is survived by her sons, David and Anne Terrell and Dan and Meredith Terrell, her grandchildren, Elizabeth and Jeff Ingraham, Michael and Michelle Terrell, Justin and Kristi Terrell, and Jordan and Jill Terrell, her great grandchildren, Ashley (Josh), Jacob, Emily, Kira (Joey), David I., Hannah, David T., Leah, Mason, Maya, Josie, Easton, Arlee, Kingsley, Brendon, and Owen, and many nieces and nephews. The family would like to thank the caregivers at Beacon Hill and Faith Hospice for their care and compassion during these last months of Virginia’s life.

Those wishing to offer expressions of sympathy are asked to consider the Benevolent Fund of Beacon Hill at Eastgate or Faith Hospice.
Read Less

We encourage you to share your most beloved memories of Virginia here, so that the family and other loved ones can always see it. You can upload cherished photographs, or share your favorite stories, and can even comment on those shared by others. 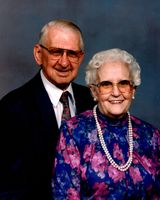