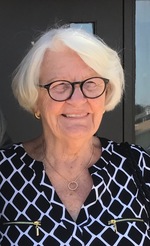 Shirley was born in Grand Rapids, Michigan but spent most of her life in the Chicago area. She chose to focus her life on fostering deep relationships with family and friends, which often included amazing meals and meaningful conversation. She was respected by all who knew her for her compassion and empathy for others, qualities that equipped her to be one of the first female Elders in her church. The family wishes to give a special thanks to Kindred Hospice for all the love and care provided.

A celebration of Shirley’s life will be scheduled for a later date when a larger gathering is possible.