To share your memory on the wall of Ruth Buntrock, sign in using one of the following options:

Ruth attended Flint High School and graduated in 1945. She was a Civil Air Patrol Cadet in her Sr Year of High School. Music was a passion for Ruth and she played the bass in the Orchestra. She attended Interlochen Music Camp in 1943 and 1944. She attended Wayne State University before marrying Robert Rucinski in 1950 and moving to Milwaukee, WI where they lived until 1953 when they moved to Iron River, MI. She later married Glen Buntrock in 1960. After raising her family and working on the farm, Ruth enjoyed quilting and was a member of a quilt club. She created many quilts for her children and great grandchildren having great patience to get it just right. She also made a few lap quilts per year and donated them to women’s shelters. She also was a volunteer at the Iron County Museum spending many hours on fund raisers to help grow the museum to its current size. On holidays, she sometimes volunteered at shelters to serve meals. Ruth loved to bake and entered many baked items into the Iron County Fair getting many blue ribbons. One of her proudest moments was winning a “Best of Show” purple ribbon on her chocolate angel food cake.

She was preceded in death by her husband Glen Buntrock, her parents; one sister, Dorothy Laughlin, one brother, Nave Fuleihan; stepson Glen Buntock, Jr., and numerous other aunts, uncles and a nephew.

Ruth is being prepared for burial at Ofield Funeral Home, 4500 Kalamazoo Avenue SE, Kentwood, Michigan 49508. The funeral service for Ruth will be celebrated graveside at 10:00 a.m. Monday, April 19, 2021, at Graceland Cemetery in Clintonville, WI.

In lieu of flowers, those wishing to offer expressions of sympathy may make a memorial contribution in Ruth’s name to the 700 Club at www1.cbn.com. or Interlochen at advancement@interlochen.org.

Receive notifications about information and event scheduling for Ruth

We encourage you to share your most beloved memories of Ruth here, so that the family and other loved ones can always see it. You can upload cherished photographs, or share your favorite stories, and can even comment on those shared by others. 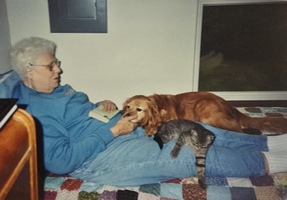