To share your memory on the wall of Robert Calesaric, sign in using one of the following options:

Bob was born in McKeesport, Pennsylvania on April 9, 1943.

Bob was born in McKeesport, Pennsylvania on April 9, 1943.

He played college football and graduated from Butler Community College in Kansas, where he studied education. Bob was a previous small business owner and was Vice-President of marketing for the Swift company. He loved to spend time with his long-time girlfriend/best friend, Rose Porter of Grand Rapids, Michigan. Bob enjoyed the casinos of Michigan and spending time with his friends and family. Bob was a huge sports fan, and was especially a loyal fan of the Pittsburgh Steelers. Bob was a friend to everyone he met and always had an interesting story or two to share. Bob loved boating, waterskiing, camping and coaching youth football.

A debt of gratitude is owed to Abby and Job Murphy and their family in Grand Rapids for all of their assistance, and for being a part of Bob’s second family.

Ofield Funeral Home will be in charge of the arrangements. There will be no funeral service at this time. A celebration of life will be planned in the future, post pandemic. In lieu of flowers, the family requests donations to the World Health Organization or your local community efforts to assist in the combat against Covid-19.
Read Less

Receive notifications about information and event scheduling for Robert

We encourage you to share your most beloved memories of Robert here, so that the family and other loved ones can always see it. You can upload cherished photographs, or share your favorite stories, and can even comment on those shared by others.

Plant a Tree in Memory of Robert
Plant a tree 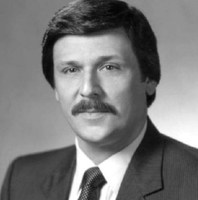