To share your memory on the wall of Patrick Coffin, sign in using one of the following options:

Patrick was a talented musician, self-taught on the piano and trained on the tuba. He traveled to Europe with the Blue Lake Fine Arts Camp and was a member of the Grand Rapids Youth Symphony early in his life. He also occasionally played with the World Famous Scottville Clown Band, wearing an outfit that had been worn by his Great Uncle, Ray Schulte. After graduating from East Kentwood High School in 2003, he started a successful rental management business with his childhood friend Ryan Vandermeer and later launched a real estate business. Patrick cherished trips to Leland, Michigan, many with his sister and mother. He especially loved when his mother cooked German food for him. He enjoyed hunting, fishing and camping trips with his father.

Patrick was proceeded in death by his maternal grandparents, Jim and Frances Lederle Schulte and his fraternal grandfather, Donald Coffin.

Patrick is survived by his daughter Leland, his mother Francine Schulte Coffin, his father Robert Coffin (Kathi), his sister Jamie Coffin Callis (Nick), his fraternal grandmother Charlene Coffin, along with dozens of aunts, uncles and cousins.

Patrick will be cremated and a memorial will take place later in the summer.

Donations can be made to the following in lieu of flowers:
Sanford House at John Street for Men
221 John Street NE
Grand Rapids Mi 49503

Receive notifications about information and event scheduling for Patrick

We encourage you to share your most beloved memories of Patrick here, so that the family and other loved ones can always see it. You can upload cherished photographs, or share your favorite stories, and can even comment on those shared by others.

Posted May 19, 2020 at 10:03am
First of all I want to say truly my heartfelt condolences go out to him and his family. He gave me an opportunity when I had NOTHING! He allowed me to live in my home as a 1st renter which eventually started my family. My wife and I began our journey with Urban Pharm. I truly appreciate his patience and his kind demeanor. You will be missed my friend.
Comment Share
Share via:
MD

Posted May 18, 2020 at 05:35pm
Patrick had a kind gentle soul that made everyone smile. Once he let his guard down and let people in the true patrick would shine. Always helping others with a kind word or help with a problem. I had the pleasure of knowing Patrick toward the end and am saddened at his loss but know his battle is won and he no longer fights the demons of addiction, and is pain free is heaven ! Rest in peace.
Comment Share
Share via: 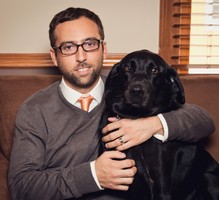