To share your memory on the wall of Jodean Lenartz, sign in using one of the following options:

Print
Jodean Marie Lenartz age 72 of Grand Rapids, Passed away peacefully at home on May 11, 2021.

Jodean struggled courageously against C.O.P.D for the last year. She was born April 8th 1949 to Joseph and Doris (Balczak) Lenartz. She graduat... Read More
Jodean Marie Lenartz age 72 of Grand Rapids, Passed away peacefully at home on May 11, 2021.

Jodean struggled courageously against C.O.P.D for the last year. She was born April 8th 1949 to Joseph and Doris (Balczak) Lenartz. She graduated from Northview High school in 1967. She retired from the restaurant industry with more than 30 years of service. Jodean enjoyed bingo, poker and board games with her dear friends from AA. She celebrated over 11 years of sobriety that provided great peace in her life.

Our family would like to extend our gratitude to Jodean's "Entire Emanuel Hospice Team" especially Kristie, Caitlin and Abby. In memory of Jodean, please consider contributions to Emanuel Hospice of Grand Rapids.

There will not be a funeral at this time but rather a Celebration Of Life Ceremony to be announced at a later date.
Read Less

Receive notifications about information and event scheduling for Jodean

We encourage you to share your most beloved memories of Jodean here, so that the family and other loved ones can always see it. You can upload cherished photographs, or share your favorite stories, and can even comment on those shared by others.

Plant a Tree in Memory of Jodean
Plant a tree 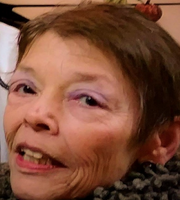