To share your memory on the wall of Hazel Wyant, sign in using one of the following options:

Print
Hazel Wyant gained her angel wings on April 24, 2021, at the age of 81. Family surrounded her in her Kentwood, Michigan home following a 2-year battle with cancer.

On January 22, 1940, Hazel was born to parents Harold and Vida Hess in D... Read More
Hazel Wyant gained her angel wings on April 24, 2021, at the age of 81. Family surrounded her in her Kentwood, Michigan home following a 2-year battle with cancer.

On January 22, 1940, Hazel was born to parents Harold and Vida Hess in Danville, Illinois. She was a 1958 graduate at Scottland High School. Hazel then moved to Minneapolis, Minnesota, where she worked as a switchboard operator. She married Ronald L. Thomure and settled in Grand Rapids, Michigan, to raise their two children. On March 8, 1997, Hazel was married to Earl T. Wyant and resided in Kentwood, Michigan. Together, they enjoyed camping and traveling throughout the country, visiting many historical sites. Their favorite time of year was when they temporarily relocated and lived in Florida throughout the winter months. Hazel and Earl were members of several square dance clubs and members of the Michigan in Motion performance group. Hazel also enjoyed gardening, coloring, and reading in her spare time.

The family would like to thank Mercy Health Lacks Cancer Center and Faith Hospice for their care and compassion during Hazel’s battle with cancer.

A Celebration of Life for Hazel is scheduled for 2:00pm on Wednesday, April 28, 2021, at Chapel Hill Memorial Cemetery, 2894 Patterson Avenue SE, Grand Rapids, Michigan 49512. There will be a two-hour private visitation for immediate family only prior to the service from 11:30am to 1:30pm at Ofield Funeral Home, 4500 Kalamazoo Avenue SE, Kentwood, Michigan 49508.

Those wishing to offer expressions of sympathy in place of flowers are encouraged to make a memorial contribution to the Ark Encounter at PO Box 510 Hebron, Kentucky 41048.
Read Less

Receive notifications about information and event scheduling for Hazel

We encourage you to share your most beloved memories of Hazel here, so that the family and other loved ones can always see it. You can upload cherished photographs, or share your favorite stories, and can even comment on those shared by others.

Weller Truck Parts!, Mimi and Tina, and other have sent flowers to the family of Hazel Marie Wyant (Hess).
Show you care by sending flowers

Posted Apr 27, 2021 at 04:06pm
We are very grateful that we got to meet Mom. She was always so happy when she got to get her nails done with us. Rest easy Mom, we love you very much

Mimi and Tina purchased flowers for the family of Hazel Wyant. Send Flowers

Steve and Tasia purchased flowers for the family of Hazel Wyant. Send Flowers

Posted Apr 26, 2021 at 07:53pm
Wishing you peace to bring comfort, courage to face the days ahead and loving memories to forever hold in your hearts. 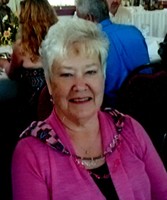