To share your memory on the wall of Hans Liebau, sign in using one of the following options:

Receive notifications about information and event scheduling for Hans

We encourage you to share your most beloved memories of Hans here, so that the family and other loved ones can always see it. You can upload cherished photographs, or share your favorite stories, and can even comment on those shared by others.

Posted Mar 31, 2021 at 09:53am
Hans was a very proud man who would help anyone . I remember him telling me what to do when we would pick up recycle papers in Leisure Village. I would ride the back of a truck get papers put out by residents and give them to Hans where he would stack them in the truck bed for reycycling. What a fine gentleman!...Richard F.
Comment Share
Share via:
SF

Thank you so much Richard for those kind words. I know that he really enjoyed the community and the people who lived there.
KR

Posted Mar 26, 2021 at 12:29am
He was such a strong, friendly, and stubborn man. He was a magnet to all who met him. I’m honored to have been able to talk, laugh, and argue with him. He will be greatly missed. Prayers for you all.
Comment Share
Share via:
SF

Kaila, you definitely had a special place in his heart. He said you reminded him of his granddaughters since you talked so much :) Thank you for being there through those times with us, it certainly made a difference. 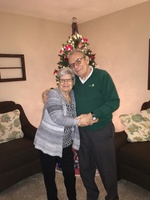