To share your memory on the wall of Gary Coleman, sign in using one of the following options:

Print
Gary Alan Coleman of Grand Rapids Michigan, age 68 went to be with the Lord on Friday, July 17th 2020.

Gary was born on October 26th, 1951, in Battle Creek, Michigan to Bill and Dimples (White) Coleman. He has 3 siblings; Bill, Cindy, and Terry.

After leaving high school he went on to serve for the United States of America in the Marine Corp.

Gary was married to Kristina (Stone), and they had 4 children; Deanna (Ted), Becky (Adam), Gary II (Lori), and Brandi (Randy). He was a grand father to Stefani, Sienna (Josh), Jacklynn, Alyssa, Gary III, Julianna, Audrina, Isaiah, Elliot and Trinity. He was a great grand father to Leigha and Asher.

Gary was very passionate about the Lord, his family, and used to love riding his motorcycle every chance he could get. He loved to go camping and fishing. He loved getting outside and enjoying the sunshine for hours at a time.

Later in life he developed a great talent of painting. He had finished 9 works of art that he would not sell, but kept kept for his family to have after his passing.

He was a charter member of Lansing Loyal Riders motorcycle club and later became the president of that club.

While a resident at the Veterans home he accumulated well over 500 movies and watched every single one of them. Gary attended the church regularly with great enthusiasm. He was baptized on Easter 2019 at the chapel in the Veterans home.

Services will be held graveside for Gary on Thursday, August 13th 2020 at the Veterans cemetery in Grand Rapids at 1pm.
Read Less

Receive notifications about information and event scheduling for Gary

We encourage you to share your most beloved memories of Gary here, so that the family and other loved ones can always see it. You can upload cherished photographs, or share your favorite stories, and can even comment on those shared by others.

Plant a Tree in Memory of Gary
Plant a tree 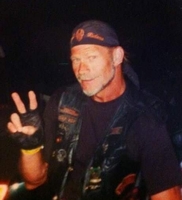