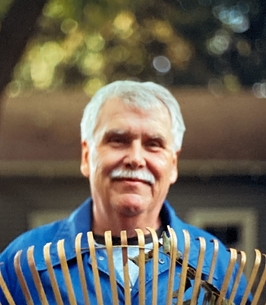 Frederick J. Christians of Grand Rapids, Michigan, age 77, went to his heavenly home on May 7, 2022. He was born in Holland, Michigan, to Henry M. Christians, Jr. and Klasina (Lubbers) Christians on June 9, 1944.

After Fred graduated from Grand Rapids Christian High school in 1963, he enlisted in the United States Air Force. He served for four years and then entered Calvin College, where he met Tila Betts, his "bride," as he often called her, during their 52 years of marriage. They were married in a historic church built in 1792 in New Jersey. Returning to Grand Rapids, he worked for Meijer Inc. at 3 a.m. every day while attending Grand Valley University full-time to finish his bachelor's degree in three years. While working with the Kent County Health Department, he was chosen to go to the Air Traffic Control Academy but chose to stay closer to home for his elderly parents, so he accepted a job as a Michigan State Corrections officer in Ionia, Michigan. He advanced to the level of Resident Unit Manager until he retired in 2003 after 29 years. In his younger years, he loved to take the family camping. Talking with his children and grandchildren became one of his greatest pleasures in his later years. He always had a joke to start his conversation with them. He was an avid chess player and loved watching sports and playing with his dogs.