To share your memory on the wall of Clifford Kohlbeck, sign in using one of the following options:

Cliff grew up in Ada, Michigan, where as a teenager he worked for his father in building construction of homes and businesses. He served in the US Army in Korea and achieved the rank of Sergeant First Class. He met his beloved Lynneth at the Boat and Canoe Club in Grand Rapids on the dance floor. They maintained their love of dancing together throughout their 63-years of married life. After marrying in August 1955, they moved into the home on Pettis Avenue in Ada, where they raised their family of five children and resided until 2012. Cliff loved caring for the yard, a garden, and grilling for many years of family gatherings at their cozy home. He was the ultimate grill-master of the Kohlbeck Family.

Working in road construction for much of his adult life, Cliff and Lynn owned and operated U-Co Ltd, an underground contractor from 1976-1981. In 1988 They became real estate agents, where Cliff brokered the deals and Lynn worked the sales end. They started their own real estate company, Creative Reality, Inc., working with a residential developer to sell new homes in the Lowell and Cutlerville area.

Moving to their “retirement” condo on Springtree Lane in Cutlerville, MI, Cliff continued his love of caring for grounds and being on “mole patrol.” He loved convertible rides to rural American Legion halls and the Moose where they were members for over 50 years and shared a beer with his beloved Lynn. They were nick-named the “Lovebirds” by one bartender, who regularly observed them entering the establishment holding hands. They spent many years dancing and in the last few years they found a dance club where they met new friends and danced to a live big band of talented senior musicians. They even celebrated their 60th Wedding Anniversary there.

His top priority was always caring for Lynn and his family. His loyalty and devotion were unsurpassed.

Cliff will forever be remembered as a beloved and trusted Husband, Father, Grandfather, Great-Grandfather and Friend to us all. He will be deeply missed. Private services will take place at a later date.

Receive notifications about information and event scheduling for Clifford

We encourage you to share your most beloved memories of Clifford here, so that the family and other loved ones can always see it. You can upload cherished photographs, or share your favorite stories, and can even comment on those shared by others.

Posted Jun 25, 2020 at 12:08pm
Doug and Louann - Please know that your family at the Bank is thinking of you during this difficult time. Please accept our most sincere condolences

Flowers were purchased for the family of Clifford Kohlbeck. 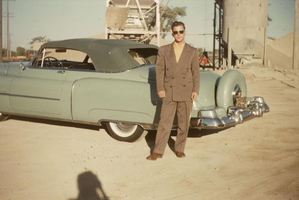