To share your memory on the wall of Andrew Chenier, sign in using one of the following options:

“Uncle” or “Shine,” as he was often lovingly called by those close to him, worked for many years for Lamen Co. as a skilled commercial pipe insulator. He had a passion for his garden and loved to go fishing, teaching his girls and grandchildren the sport.

Andy is survived by his daughter Amber Chenier and her children, Isaac, Ian, and Domonic; his niece Jamee Wrightsman, who he raised as his own from age five, and her children Jaylynn, Dorian, and Kam’ron; his sisters Connie (Jim) Eardley and Laurie (Dale) Rooks, step-sister Jean (Jon) Christiansen; sisters-in-law Kandance Chenier and Deb Chenier; brother-in-law Ken Vanhuylenbrouck; his loving step-mother Mary Ann Chenier; and several nieces and nephews.

We encourage you to share your most beloved memories of Andrew here, so that the family and other loved ones can always see it. You can upload cherished photographs, or share your favorite stories, and can even comment on those shared by others.

Posted Feb 23, 2020 at 08:12pm
Our deepest condolences on the loss of Uncle Andy. Our thoughts are with you all during this difficult time. He will surely be missed. All our love.

Nick & Kate Chenier and Fred & Becky Klein and Fam purchased the Love's Tapestry for the family of Andrew Chenier. 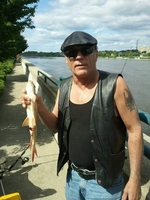