To share your memory on the wall of Alice Rembert, sign in using one of the following options:

Alice was the second of three children. She attended South High, and after that Alice went to OIC to pursue her career in nursing. After completion, she received her degree and became an RN. The knowledge Alice obtained, she shared with others to keep them healthy.

Alice was married to Theon Rembert, Sr. Out of that marriage, one child was born-- Theon Rembert, Jr. After the divorce of Alice and Theon, Sr., they both were highly active in their son’s life.

Alice loved to read and she loved to take trips to different places. She enjoyed playing cards, BINGO, listening to music and cooking. After Alice became ill, for several years she enjoyed watching TV and eating.

She was preceded in death by her parents, Douglas and Eurvin Agnew.

The memorial service for Alice will be celebrated at 11:00 a.m. on Wednesday, March 4, 2020, at Ofield Funeral Home, 4500 Kalamazoo Avenue SE, Kentwood, MI 49508. There will be a one-hour visitation prior to the service. The eulogy will be given by Pastor Michael Small.

"Granny, the time I've spent with you was joyful. You always made me feel special, especially when I was a little girl. I loved our talks as a grown woman. You've taught me a lot and I'm going to miss you so much, words can't explain!!! 'See you later alligator, after awhile crocodile' as we said when we left each other. Bye Granny."
-- from Cupcake
Read Less

Receive notifications about information and event scheduling for Alice

We encourage you to share your most beloved memories of Alice here, so that the family and other loved ones can always see it. You can upload cherished photographs, or share your favorite stories, and can even comment on those shared by others.

Tonjay Brooks and the Brooks family sent flowers to the family of Alice Ruth Rembert (Agnew).
Show you care by sending flowers

Tonjay Brooks and the Brooks family

Tonjay Brooks and the Brooks family purchased flowers and planted a memorial tree for the family of Alice Rembert. Send Flowers 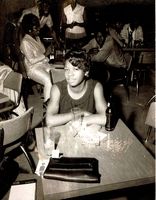